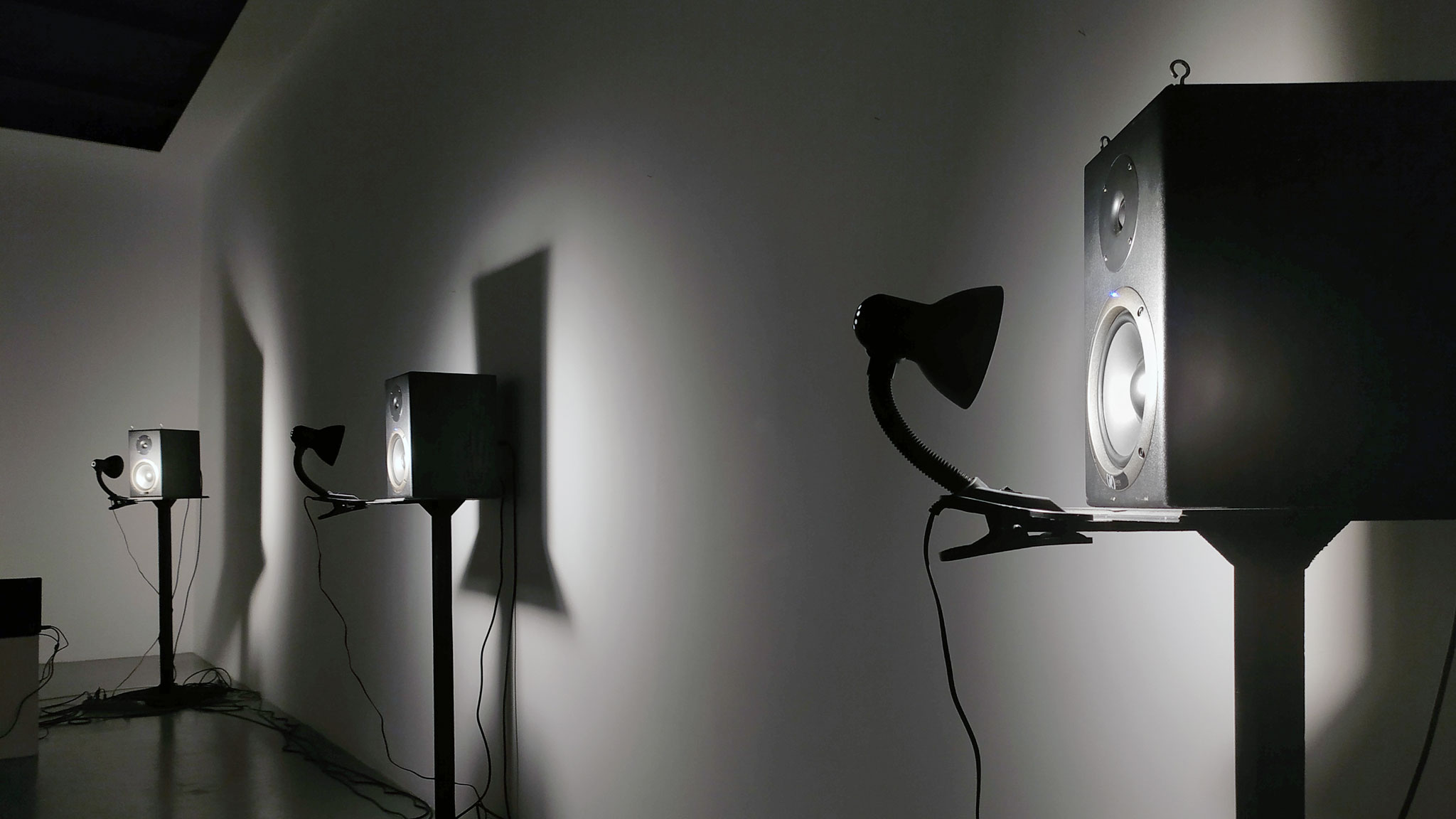 Dimitri Coppe favors the concert which means the meeting of the public, the collective listening, the live performance with a sound installation in situ, and he develops performances that freely combine composition, improvisation and spatialization.

Whereas transparency is a state associated to the properties of a body, to the body's quality to let appear an entire reality without altering it, dehiscence corresponds to a dynamic phenomenon in which closed organs open themselves to free a passageway for their contents.
Condensed elements of a research in progress, including peripheral limits and vibratile properties of a revealed movement, of a unity penetrating its principle, of an impregnated breath.

He was born in 1947, Belgian by birth, self-taught by definition, parametric music and art video composer by choice.
During his sojourn at the Instituut voor Psycho-akoestik (IPEM) in Ghent from 1972-1975, de Laet came into contact with Karel Goeyvaerts, resulting in a number of concerts and works on which the two composers collaborated. At the IPEM he also met Lucien Goethals and Herman Sabbe.
In order to increase public awareness of the music of the avant-garde, de Laet set up the Studio voor Experimentele Muziek (SEM) in 1973.
In 1974, the SEMensemble was founded, with the aim of producing live performances of post-production studio techniques (a constant in de Laet’s oeuvre), thereby allowing electronic means to become real time communication. In the performances of this ensemble, many different artistic disciplines (such as theatre, poetry and experiments with light) were combined into a whole by such composers as Karel Goeyvaerts and André Stordeur. For the performances including traditional instruments, he drew on the talents of, amongst others, Luc Brewaeys and Serge Verstockt.

The base for this work is an algorithm that I wrote in C+ to create a process for pitch, time and duration of oscillators. Average values were also generated from these calculations. They were assigned to a separate sequence, for other basic synthesizer sounds. Their sound results were grouped into distinct sound tracks, in order to obtain the fixed lines of a clear sound process.
Many of the variables of the algorithm I wrote allowed me to record lots of sound developments of the same kind, but with different values for pitch interval, end tone, tempo, number of events and duration. Their final sound mix was a basic amalgam of their converging sound results yielding organized basic sound material. It served as the basic sound material for the acousmatic processing process that followed.
Next stage was the composition of the basic sound layers. The association of different events and their spatial assignments to the separate tracks. Mainly vertical synchronizations, spectral transformations, FFT filter developments and spatial composition on 16 tracks, followed.
During this stage I performed the Indonesian bamboo tambourine and created noises from a Tibetan trumpet as separate compositions in the extension of the established order, and with a substantial role for the development of the composition.

Roeland luyten (Leuven, Belgium, 1977). By watching science-fiction and horror movies as a young boy, he comes for the first time in contact with electroacoustic sounds. At the age of eight, he starts to study the flute at the music academy in Louvain. During high school, he learns to play the electric guitar as an autodidact and starts to experiment with effects pedals. During his study of the classical flute at the Royal Conservatory of Antwerp, he finds his real passion in the studio for composition of electroacoustic music with Joris De Laet. Since then Roeland composes regularly new pieces and works as a composer and sound engineer along with various theatre and dance productions in Belgium and abroad. His music is played and has received prizes throughout the whole world.

The intention of this piece is to create a quantum planetary universe of splintered sounds. This can easily result in just chaotic randomness. Therefore, I clot separate short sound clips into groups. In turn, those new groups clot into bigger clusters. This way I gain massive individual sound objects with high granular density. Polyrhythmical structures are enclosed by repeating short granular patterns, like frozen mechanisms. These loops connect the bigger sound objects in time. Some things are too big to control, others too small. In between I compose.
"Helena" received a special mention on the competition "Métamorphoses 2014" (Brussels), was a finalist on the competition "Città di Udine - TEM 2014" (Italy) and won first prize on the 7th International Competition of Electroacoustic Music Composition, Category Acousmatic, of The Foundation Destellos (Argentina) in 2014.

Electrical Engineer with a specialization in Telecommunications from Université Libre de Bruxelles (ULB), he received a First Prize and a Higher Degree in Electroacoustic Composition at the Royal Conservatories in Brussels and Mons.
Co-founder and president of ARTeM (Art, Recherche, Technologie et Musique) and FeBeME-BeFEM (Belgian Federation for Electroacoustic Music), co-founder of Forum des Compositeurs, he was researcher at ULB, Faculté Polytechnique de Mons and Numediart Institute, Professor at ESA-Arts2 and was Belgian representative of EU-COST actions DAFx and ConGAS.
His electroacoustic music shows a special interest for new forms of gestural interaction, sound transformation and spatialisation. Fascinated by the dialogue with other art forms, he also composes music for film, video, dance, theatre and sound installation. Prize-winner in several international competitions, his music is regularly performed in international festivals.

I have always been touched by the voice, spoken or sung, attracted by foreign languages and deeply disturbed by certain timbres, inflections, breaths or prosodies. The study of voice analysis and synthesis at the Laboratory of Experimental Phonetics of the ULB, the understanding and extraction of the different parameters that affect its timbre did not explain why I resonated with certain voices and vocal modes rather than others. This work is the third part of an intuitive and sensual exploration of this mystery.

It is inspired in particular by Russian texts recorded in Moscow and spoken by Anya Pospelova : excerpts from 'The Master and Margarita' by Mikhail Bulgakov and texts by the poet/singer Yanka Diaguileva.
With very different energies, both used a peculiar mix of fantastic and realistic elements to bring us to unexpected places, resisting soviet censorship and reaching their audience through samizdat and magnitizdat.

In 1987-88 he studied Electronic Music Composition at the Antwerp Conservatory and has since worked with various ensembles and artistic groups.
His own work consists mainly of electro-acoustic compositions in which he strives to create his own colourful and diverse sound palette. The computer and the development of algorithms have always been an important instrument and language in this. The spatiality and mobility of the sound are also key elements for him. In recent years, he has also been investigating the integration of acoustic sounds and music into these electroacoustic compositions. He does this with self-built computer-controlled instruments.

Two Voyagers, 35 years on their way
This composition arose from the awe of space and the amazement that man is capable of sending two unmanned spacecrafts, the Voyagers 1 and 2, into interstellar space. In 2012, some 35 years after their launch, these unmanned probes crossed the boundaries of the solar system. Hence the title "Voyager 1&2"
New sounds and Sonifications
In addition to new electronic sounds from Reaktor and from Max/MSP, concrete sounds were recorded in the studio. Also some sonifications were used which have been made available by space agencies ESA or Nasa. In these files, received measurement data is transformed into a sound file so that these measurements become audible.

Jean-Baptiste Zellal approaches composition in the Conservatory of Music in Nice with Michel Pascal, Antony Maubert and Gaël Navard then in Mons with Philippe Mion and Ingrid Drese. In 2017, he holds a Master in acousmatic composition at the Superior School of Arts in Mons.
He creates and plays music in various ways. Passionate about live experimental music, his action integrates composition, electroacoustic performance, and acousmatic interpretation as well. His multidisciplinary approach leads hime to work with many performers, musicians, poets, choreographers and stage directors.
His music is regularly programmed in Belgian and international events: Ina-GRM (Paris), L'Espace du Son (Brussels), CIME (Moscow), Festival ReMusica (Prishtina) Festival MANCA (Nice), Monaco Electroacoustique (Monte-Carlo), JIME (Amiens). In 2017, he wins the first price of the spatialization interpretation contest in Brussels Festival L’Espace du Son.

This piece is the acousmatic version of the eponymous mixed piece, written for Table de Babel and tape. The Table de Babel is an experimental lutherie instrument, built by Jean-François Laporte in Montreal, which uses compressed air to vibrate latex membranes attached to different resonators, the resulting sounds can be modulated by varying the air pressure, but also by a variety of gestural accesses.

The title, fracture, refers to an event that marked my life at the time I started to compose this music. The kind of event that seems to break the course of existence, after which life will never be the same again...

Born in Havana, he studied in the Conservatoire Royal de Mons, in Belgium, where he obtained a Master in acousmatic composition and where he teaches since 2010. He composes acousmatic music, as well as music for radiophonic pieces, dance, film, theatre and installations. Various collaborative projects for which he was composer have been awarded prizes in the fields of radio, dance and film. He has as well gained distinctions for acousmatic compositions (Metamorphoses 2010 and 2012, World Music Days 2012) and in 2017 he was awarded the Prix André Souris for young composers by Forum des Compositeurs. His music has been played in various countries in Europe, America and Asia.

An imaginary ritual.
The parallel life of the elements.