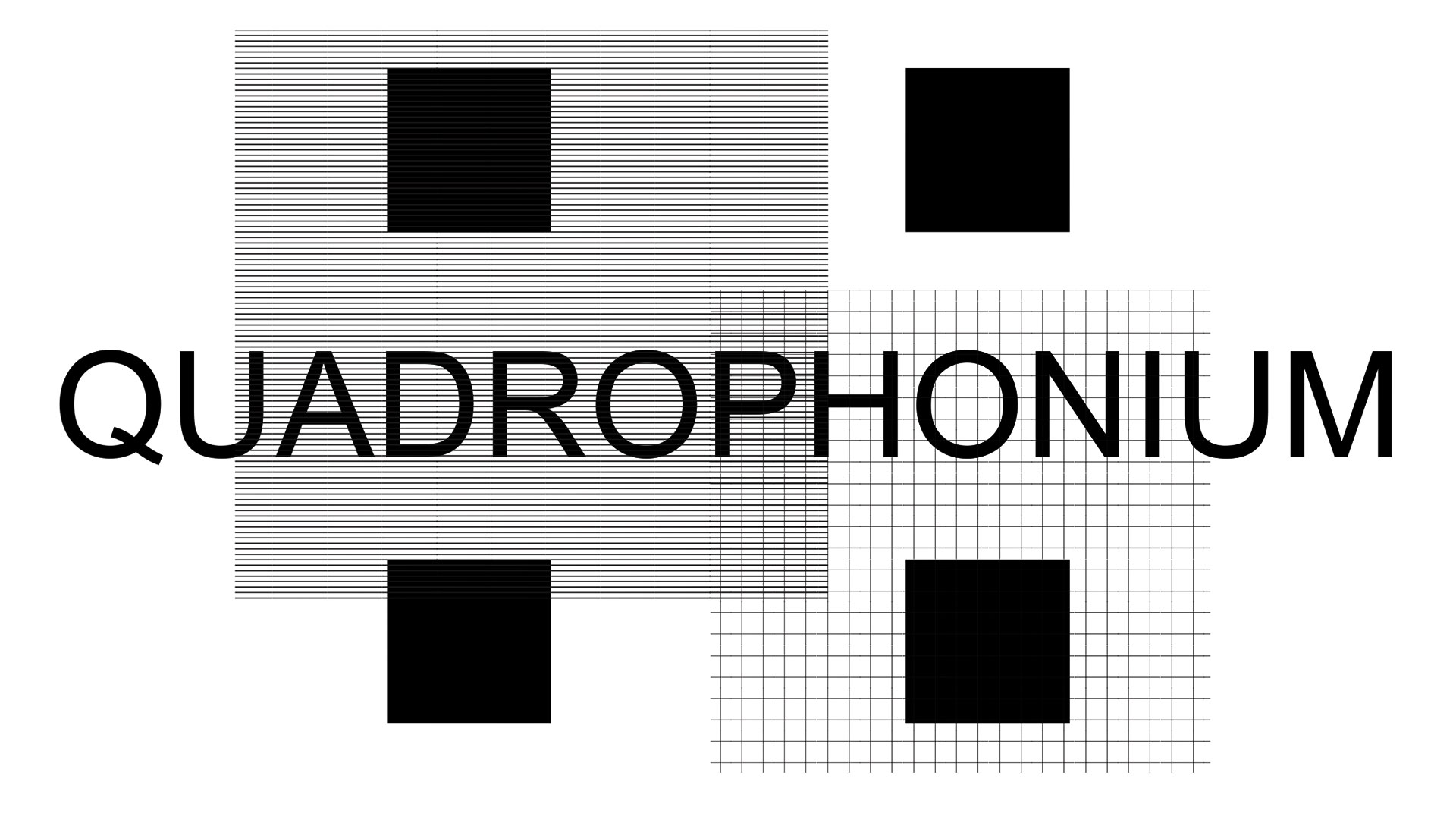 A study into the potential for playing, recording and experiencing the piano. Different elements of the instrument were recorded and played on separate channels that can be heard intimately, or within a compositional whole. One channel captures the raw emotional expression of melodic piano playing, contrasting with discordant harmonics on prepared strings on another. A third channel concentrates on electromagnetic manipulations of the piano strings, whilst the fourth channel pulls away from the piano’s physical structures with an exploration of tuned feedback. Together the elements form a meditative piece that unfolds and refolds over a duration of nearly thirty minutes.

This work has its generation origins from the piece by J. Cage 7'10.554 "for a percussionist, specifically the electronic realization of a voice / line (A) of the score, left freely interpretable by Cage who did not exclude a realization with supports electronic already in 1956. Realized the line A electroacoustically usable for the execution with a percussionist in the execution of the original score, this electronic material is elaborated and re-organized to give shape to a series of titled pieces entitled as completely acousmatic, while the following are associated with an acoustic instrument of the Western tradition. The acoustic material is modeled, redesigned and sculpted to shape new pieces with common source material. In this way a sort of wide range of sound variations / sculptures is generated which see material as the main focus in the relationship between space and the vibrational energy (timbre) of sound.

Barry Wan (Hong Kong). One Summer's Day I Was Hoping the Justice Will Be Served

This piece was composed when I was in Morelia, Mexico at CMMAS during my artist residency program. This piece consists my memories and feelings of the summer in 2019 between Hong Kong and Morelia: the protest sound in Hong Kong, soundscape of a Taoist temple, news in Cantonese and English of radio, street performance in Morelia, the city centre as well as outskirt of Morelia’s soundscape. Although the sonic materials are from two opposite sides of the world, finally, they come together to become a single acousmatic piece.

Ahora que está pasando is an electronic work that poses an apocalyptic world where the end is near because now it is happening and there is no escape. The machines dominate us and the alerts of the sirens and explosions immerse us in an overwhelming reality where the sounds generated by synthesizers invade the space of the work and our mental space. This density of sound will calm down until you reach a place of rest? or scorched earth where it only remains to breathe, breathe deeply, and that is enough.

Pivot explores the mechanical and pitched sounds of my daughter's spinning top.

The work here is played in Tape Version while originally is written for Live Instrument (Violin) and Tape (Animal Sounds, Field Recorings). As a concept, It is based on a phrase that our grandparents in villages used to say, “your voice should roll like a nightingale”. This phrase shows the interactivity between humans and sounds from natural environment (especially animal voices and sounds), something that formed in large their musical aesthetics, depending of course on the idiosyncrasy of each topos.
This type of expression I am trying to develop in this work, when trying to listen the voices of animals and react to them intuitively, without thinking much about it… It is a type of acousmatic intuitive dialogue.

This work combined recording of acoustic instruments (violoncello and violin), synthesizer outputs and environmental sounds. My approach here is very close to anecdotal music: the sound sources became unimportant; they are merged together in a new context musically. The sounds left their original environments and meet in an unknown space.

Hawking ,bells... Those familiar old Beijing culture is slowly fading out of our vision ,this composition through the streets and alleys of the classic cries, the sound of the noise of the sampling,through the effect of multiple processing,through the four-channel technology,meaning to bring the listener to the deep hawking of the alleys.

The typical sound “Shh” can be translated in the phonetic range with the character ∫. This sound has mainly the only function to ask for silence, used before a concert begins, in a conversation between two people, with a mother to bring the child to sleep or as a threat. The "Shh" sound carries only one meaning, but may have very different purposes.

Through the played “Shh” sounds ephemeral spaces in the room are evoked and unfolded. The original sound source multiplies spatially, creates non-existent spaces through the multichannel spatialisation and ultimately dissolves in the atmosphere of the concrete space. An evocation, however, which is made possible only by the effect of spatialisation and thus develops a dependence to multidimensionality. Because without it, it might just be white noise.

“Mono No Aware” is a Japanese concept that refers to a nostalgic understanding of the transient nature of things. In this acousmatic piece, a train traveler in Japan undertakes a mental voyage into fragments of memories, that inevitably warp and overlap with each other. Regarding its composition, “Mono No Aware” puts into practice a technique that the composer has denominated as “klangfarbensampling”, or the distribution of a timbral “melodic” line comprised of fragmented recordings juxtaposed with textural layers of sound. The distributed melody is in itself a short summary of the piece nested into the first section, portraying a non-linear approach to time.

The field recordings used in this piece were captured in Japan by the composer in the cities of Tokyo, Osaka, and Kyoto.

The low frequency radio waves that propagate in the Earth’s atmosphere assume distinct characteristics in relation to the emitting source as well as the receiving point, affected by phenomena such as reflection, refraction, diffraction and absorption. Considering the electromagnetic radiations generated by natural disturbances, these phenomena have been transposed into an audio feedback network in order to obtain imaginary results by exploring the effect of space-time parameter variation: a kaleidoscope of sounds floating in a dynamic system with ever-changing variations of the rules of the counterpoint.

The sound source of this work is some of the sounds my parents recorded for me when I was a child. By chance, I got them and came up with the idea of using them to write a musical composition. The technical processing of this work is based on the Logic and Ableton Live platforms, and is finally presented through various deformation processing and development of the sound.

The streets are noisy, crowded, and traffic is heavy. In today's Chengdu city, the noise and hustle and bustle always contain bit by bit about the University Games. The construction of the stadium, the news reports, the sweating of the athletes in the training ground, whether it is the joyful shouts when applying for the event or the regretful sighs when announcing the postponement of the event, all these are accompanied by various sounds. The inspiration for the work comes from this, combining abstract and concrete sound, expressing the busy status quo of Chengdu with sound, and the prospects for the future are still promising.

The work is a four-channel electroacoustic music. The author sampled sounds in the city her live as materials to express the following topic in form of soundscape: The routine of urban dwellers just like substances get into each organ to take part in vital movement through blood. The first part, the sounds inside the subway and the hammering sound are taken as the main sampling materials to make a micro-living environment. The second part, human voice samples are introduced to form a mutual echo relationship. The third part evolves from the first part to reflect a three-part structural logic.

Fattori is a sound piece created with digital synthesis and eleboration from field recording. The sonic elements are connected to each other with the intention of creating an organic stratification. A collage of sound that accompany the listener in an ethereal dimension, between dilated sounds that complete their cycle and small tensions that give way to the propagation of new events.

Zhenbo Su (China) In the Bell

This is a piece of electroacoustic music for four-channel. This piece is for all the people and those fighting the epidemic in Wuhan in 2020, with chime bells and patients' voices as the theme motivation. Moreover, in its detailed conception and development, the work constructs different dialogue relations such as "one to one", "one to many" and "many to many”.In three different structural sections A, B and C, the work depicts the spread of the epidemic and people's life through the elements of musical range and rhythm.